Set sales goals and track progress against KPIs to always know if your team is on track.

Written by Zachary
Updated over a week ago

Watch as Jordan Muela with LeadSimple and Jeremy Pound with RentScale expound on the Sales Forecasting Dashboard in this webinar recording:

First off, why set growth goals and forecast?

Many of you reading this article have a door growth goal for the current month, quarter, &/or year. Have you ever been frustrated by not being able to measure your progress towards those goals? We have. Goals are useless if you can't measure your progress towards them, so that's why we've created a powerful goal setting & forecasting dashboard to help you keep a pulse on your growth goals.

How does it work?

Our new dashboard allows you to set your sales goals for any period of time and track your teams actual progress towards that goal. We do this with the following three tabs:

Let's start with the assumptions tab. 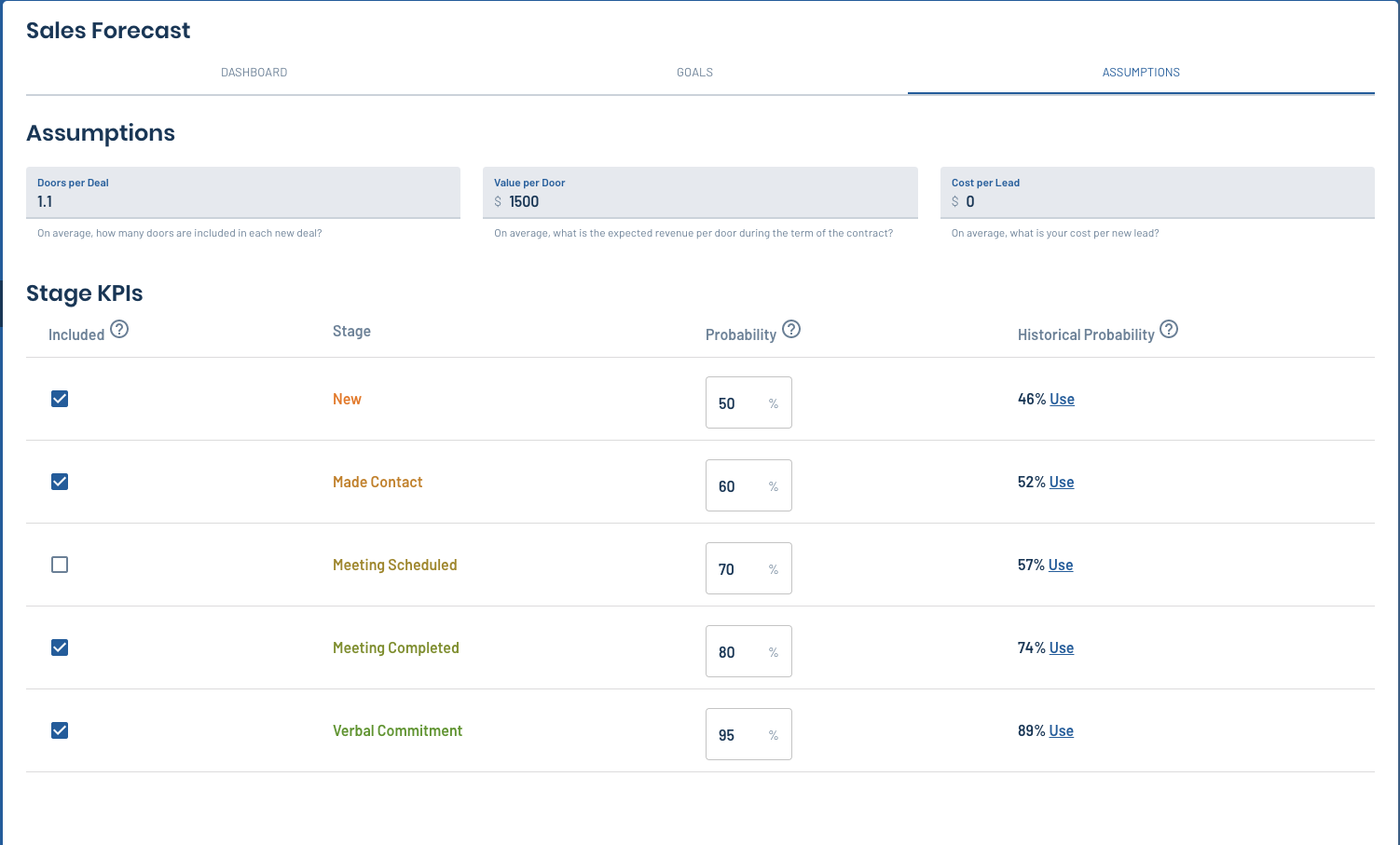 Under the assumptions tab, you set the following metrics that help power the dashboard.

Remember that these numbers are flexible and you can make them to match your specific use case.

It's great to track conversions, but this is a "lagging indicator", not an early warning system. To forecast accurately, you have to look upstream at what is coming down the pipeline. Your sales stages can tell you how likely you are to hit your goal, AND, if you're missing it, where the problem lies.

Now that you've setup your assumptions, it's time to set some goals! You can set goals for any period of time and adjust them on the fly as well. Below are the goals set for Q4 2019, which just got underway. 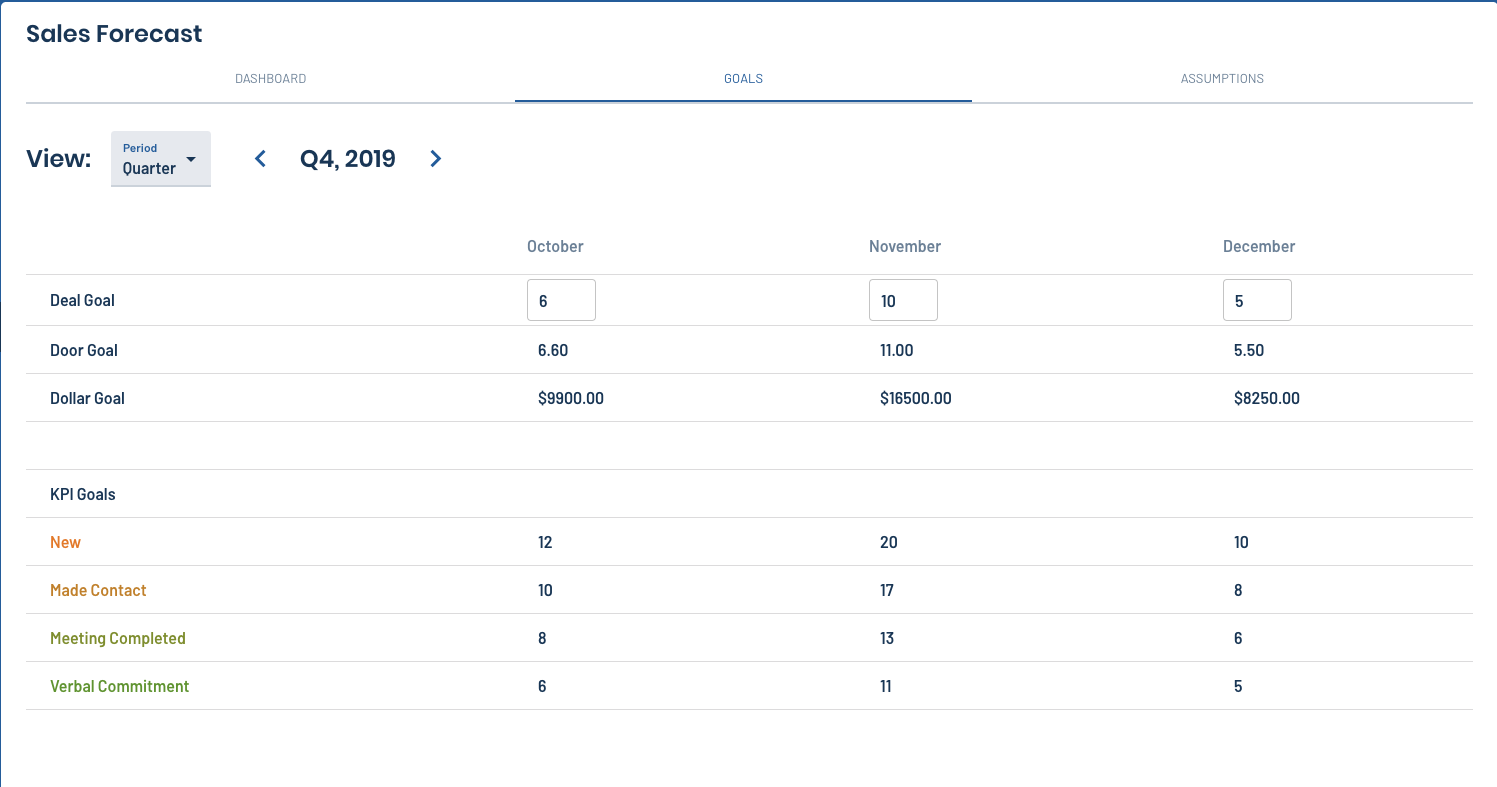 As you can see, our sales goal is to close 6 deals in October, 10 in November, & 5 in December since it's a slower month. The goals we set then use our assumption metrics above to calculate the Door and Deal goals. We also use the Stage KPIs you selected with the probability set on each stage to tell you how many deals you need in each stage to reach your goal!

For example, take a look at the New stage. With a 50% close rate (yes, I know that's high ;), we would need 12 deals in the New stage to reach our goal of 6 won deals for October.

Getting excited? Yeah, me too ;) Now let's look at the dashboard. 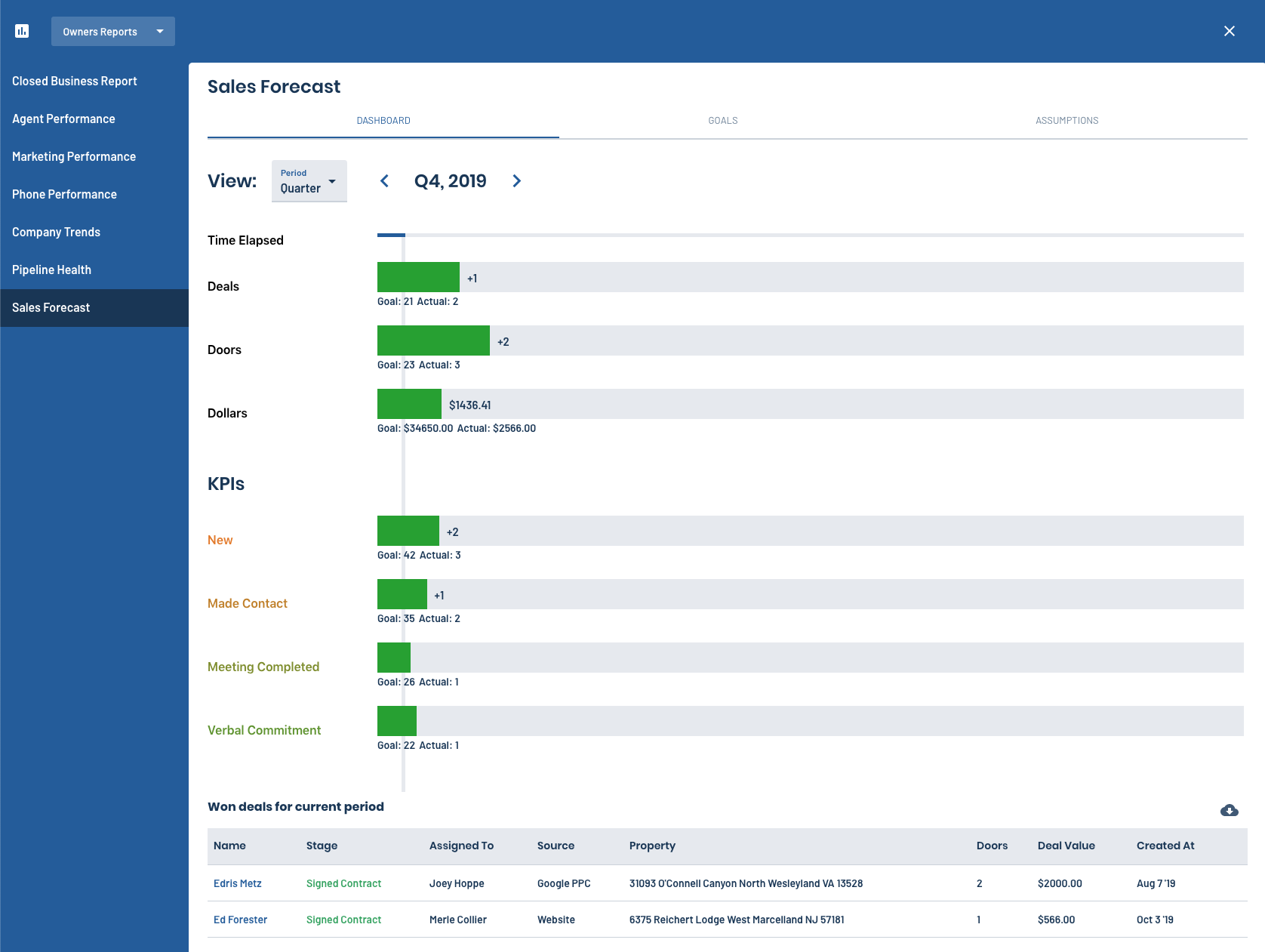 As you can see above, we're viewing the dashboard for Q4, 2019, and thanks to some super work by the team, we're on track! We can see our Deal, Door, & Dollar goals and our actual progress towards them.

The time elapsed within the period is displayed in the vertical & horizontal bars at the top. 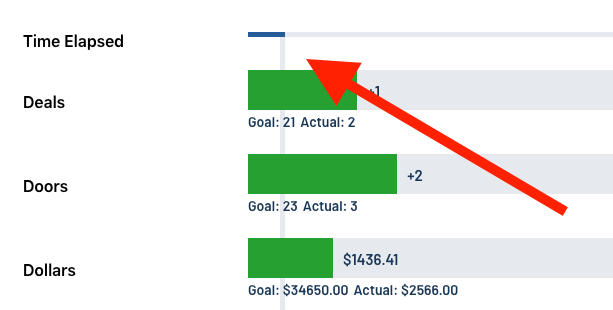 At the bottom, we display a list of won deals for the current period so your team can easily see what deals were won, make edits, or see missing deals that should be there.

It's worth noting that deal value and doors are both editable fields on every deal and are used to power the dashboard values above. If you don't set a value or door count, we fall back to use the metrics you provided in the Assumptions tab. The door count is automatically incremented if you add or subtract a property.

To borrow a quote from Henry Ford, "Whether you think you can or can't, you're right." Goals are often just dreams. This dashboard merges your goals with actionable & trackable metrics so you can move from "can't" to "can".

We're excited to launch this new feature and look forward to your feedback on how to improve it in the future!